Everyone You Love Will Be Happy Soon 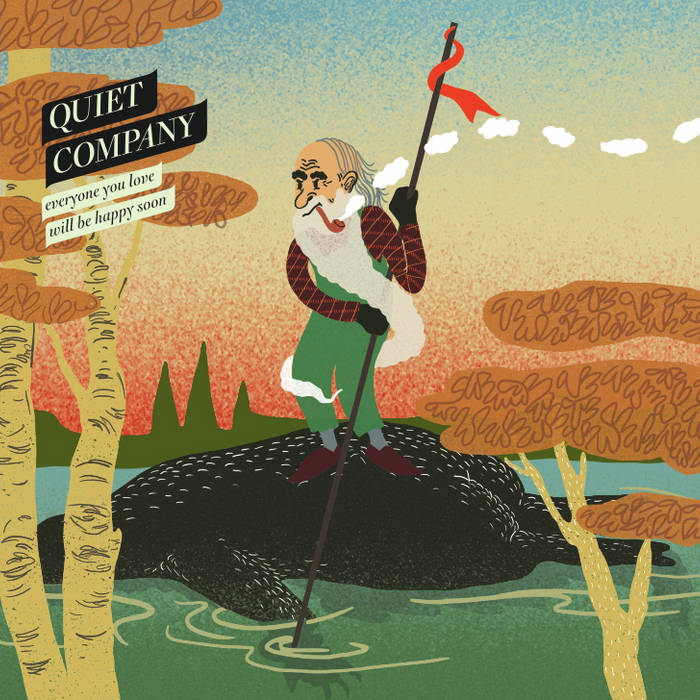 After the release of their critically acclaimed first record, “Shine Honesty,” Austin’s Quiet Company took to the road for over 200 shows all across the U.S. The video for “Fashionabel,” by Emmy nominated director Cameron McCasland, won several film festival awards and was added to rotation by MTV.CA. During that time songwriter Taylor Muse began recording demos that would later become “Everyone You Love Will Be Happy Soon.”

Soon after the tour the band sought and achieved release from their agreement with Northern Records and began making plans to release their new record by themselves. Now, almost three years in the making, the proudly present to you, “Everyone You Love Will Be Happy Soon”. Lyrically, the record promises songs that will make you fall in love with life and then just as quickly challenge everything you know about it. With 15 songs equaling an hour of music, Quiet Company tells tales of love, death, and frustration with the world we’re forced to live in. Though always uplifting, the songs range form the raucously energetic to the beautifully intimate and never go without melodies that are immediately haunting and infectious.

Here's a review from Andre Salles at tm3am.com

Three years ago, Austin songwriter Taylor Muse appeared out of nowhere, releasing a hell of a debut album, Shine Honesty, under the name Quiet Company. I don’t regularly listen to a lot of the records I bought in 2006, but Shine Honesty still gets a lot of spins to this day. The reason is Muse’s songs – they are dynamic and bold and melodic, and they reveal more little pleasures each time you hear them. The album was like a sustained fanfare, announcing the arrival of a major talent.

I wanted more right away, but it took three years for Muse and his collaborators to put together Quiet Company’s second album, graced with the glorious title Everyone You Love Will Be Happy Soon. In those three years, Muse has left Northern Records and struck out on his own – the new QuietCo album is a self-released affair. Which means it will probably reach fewer people than even the debut album did, unless word gets around. Well, I’m about to do my part, because this album is excellent – it’s not as immediate as Shine Honesty, but with repeated listens, it reveals itself as a gem, better in many respects than the band's terrific first effort. Put simply, you should buy this, and you should buy it now.

On Shine Honesty, Muse overdubbed himself again and again, achieving these dramatic epics that belied his budget. On Everyone You Love, he’s gone even bigger. The sound is somehow more homespun and ragged, but the songs are more confident, more layered. It’s a more complete album, a fuller experience. New band member Thomas Blank, who plays guitars, pianos, organs and other things, helps flesh these tunes out, and there are a host of guests this time. It sounds more like a band effort than the one-man show Muse gave us last time.

What hasn’t changed, however, is the songwriting. Taylor Muse remains a singular talent – there are 15 songs on this thing, and every single one packs a melodic punch. Even the most typical of these tunes, the Wilco-esque “Golden (Like the State),” goes places you won’t expect, and when Muse really builds up a head of steam, his songs unfold and flower and evolve, rarely ending up where they began. “Seal My Fate” begins with four chords on a loping acoustic guitar, but check out where it goes – the delightful sunshine pop chorus is fantastic.

Highlights? Okay. The deliriously-titled “It’s Better to Spend Money Like There’s No Tomorrow Than Spend Tonight Like There’s No Money” gallops to life with an electric piano figure and a quick-quick drumbeat, and its energy never flags: “You better stop and smell the roses, you better love the life you live,” Muse sings, and the joyous music backs him up perfectly. “Our Sun is Always Rising” is one of my favorites. It begins with a simple piano sketch, guitars and drums crashing in out of nowhere and disappearing just as quickly. But it evolves into an epic pop wonderland worthy of the Polyphonic Spree.

“Red and Gold” is the album’s most beautiful moment, Muse stepping into Fleet Foxes territory for a few minutes. A fragile acoustic guitar, some sweet harmonies, and a great little melody – what else do you need? Oh, right, thoughtful lyrics, which Muse also provides in spades: “Take your time discussing all your needs, because every road will end up at the sea,” he sings.

Some of these songs are straight diary entry, some (like the sweet “Congratulations Seth and Kara”) are letters to specific people. But every one of these lyrics is considered and well-written – Bono should take notes. Muse wrestles with God, just like Bono does, but Muse’s struggles somehow seem more real, less concerned with an audience. He argues scriptures with his brother in “Seth and Kara,” and in “The Beginning of Everything at the End of the World,” he declares that modern religion “leaves me feeling cold, leaves me feeling faithless, because our scars both old and new, they never seem to shame us.”

And just like last time, Muse really pulls out the stops at record’s end. He’s already asked you to listen to 45 minutes of relatively complex pop by the time you get to “How to Fake Like You are Nice and Caring,” a seven-minute excursion into awesome, but you won't mind. The title is a reference to Magnolia, and the song is a doubt-filled excoriation of this greedy world. Once it gets going, it’s like a roller coaster, zipping through different movements and melodies with graceful ease.

He gets no less epic with “On Modern Men,” another one that starts slow and builds relentlessly, Sufjan Stevens style, into a wall of sound. “They want you to take a bow, everybody here’s allowed one, so make it good, son,” Muse sings, effectively bringing the album to a close. Sweet coda “Congratulations April and Lucas” is like a parting gift: “I’m gonna count my blessings, I’m gonna count my sacred things…” Despite the noisy denouement, it’s a low-key, optimistic finish to an album that has laid bare its author’s soul, and by the end, you feel Muse has earned his rest.

I didn’t know what to expect from a second Quiet Company album, and in some ways, I feared the first one may have been a fluke. In retrospect, though, I’m not surprised that Everyone You Love Will Be Happy Soon is this good. This is the sound of Taylor Muse coming into his own, and what a sound that is. I only wish more people would get to hear it.

So here’s the deal. You can hear a bunch of songs from the new record here. If you like it, you can buy it here. Last time, I favorably compared Taylor Muse to Paul Simon, and this time, I’ve given his record a better review than U2’s. That should tell you something. Click over and check it out. You won’t regret it.